Thermocouples are temperature measuring sensors which are made of 2 dissimilar metals. The metal is typically in the form of wire and the end of one wire is welded to the end of the 2nd wire. If the 2 wires are insulated from each other and run closely parallel to each other, a thermocouple is formed.

A voltmeter placed across the open ends of the parallel wires will indicate a voltage if the welded ends are at a different temperature . If the ends are at the same temperature, zero volts will be observed.

If the open end of the wires are held at a constant temperature, the voltage read by the meter is proportional to the temperature difference between the ends of the thermocouple.

The sensitivity of the thermocouple is determined by the two metals used in its construction.

Since the beginning of thermocouple technology, different metals have been used to make thermocouples for use in different applications and environments.

Thermocouples have their leads color coded for identification. Some have magnetic leads so they can be identified with a magnet. (see chart at end)

2 wire transmitters for thermocouples have 2 difficult requirements to meet. The signal levels are very low and temperature stability of the circuits is a challenge.

The transmitter terminals are referred to as the cold junction compensation connection.

Thermocouple voltage charts are referred to the temperature of the junction end with the cold junction end being at 0°C.

No thermocouple is linear over a wide temperature range. When the temperature must be known accurately, linearity and stability is required.

Many applications, such as alarms, only require accuracy in repeatability.

The microprocessor based transmitter can also reduce drift by checking the gain and offset of the signal amplifiers against a precision reference voltage and zero offset (ground). It performs a math equation every sample to remove amplifier gain drift and offset drift.

This capability of auto zero makes the transmitter as accurate and stable as the reference voltage used for comparison.

Due to the low levels of signals thermocouples create, the system of thermocouple and 2 Wire transmitter requires care in wiring to prevent noise pickup.

If the metal sheath is grounded to the earth through the pipe or other metal object it is mounted to, it makes a safer installation. Lightning in an area can create powerful magnetic fields which can create sparks from ungrounded metal object to grounded objects.

The grounded thermocouple wire creates an opportunity for a ground loop if an electrical path exists from the thermocouple to another ground connection in the system.

Due to the common practice of grounded thermocouples, it is wise to use isolated 2 wire transmitters to prevent ground loops.

Thermocouple wires should not be run in the same cable trough or conduit as AC power wiring.

Capacitive or magnetic coupling will induce an AC current in the thermocouple wire and the signal will have AC “noise” imposed on the DC signal.

Thermocouple probe with head to hold 2 Wire Transmitter. Probe mounts on pipe fitting with probe protruding into pipe or tank.

Thermocouple probe for mounting on pipe fitting with probe located at point of measurement. Connector on wire to plug into measuring instrument. 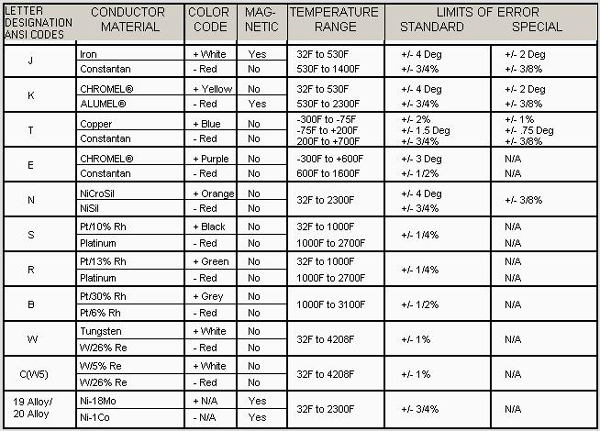